This blog is a bit of a ramble. Bear with it though, you might even crack a smile.

Just lately, I’ve noticed that there are a lot of Twitter users taking to the platform to make fun of Facebook and LinkedIn users. Frankly, I think this sort of behaviour is… actually very funny because I can relate.

If I was to generalise my experience with these platforms, Tweeter @jeannes_jargon does a pretty good job with this tweet (which went viral earlier in the year):

To expand on this slightly…

Facebook: lots of weird shared promotions and adverts. That odd colleague you worked with 10 years and 3 jobs ago posts stuff that makes you think, “Have they been hacked? Don’t know, could go either way.” Then there’s the “I know 90% of people won’t share this…” nonsense and “how many likes can we get for Winston Churchill?” And so on…

Facebook also has a reputation of being somewhat twee, but I have a theory about this.

Those of us who were among the first to take to Facebook when it really kicked off (around 2006) were around student age (students being its initial target audience), making most of us now in our thirties. That means now our timelines are full of weddings and babies etc, far from being the blurry, booze-soaked, nightclub documentary it once was.

In short, it’s no fun being an 18 year old on Facebook when your parents are there. However, as I’ve gotten older and my parents have joined Facebook, I now find I post on Facebook mainly just to stay in contact with them and let them know I’m doing okay. How times change.

That’s not to say there isn’t a large youth audience; I just very much doubt they are as active as we were. “Then why would they have accounts at all Mr. Know-it-all Social Media Man? Riddle me that?”

Well, because Facebook is now ubiquitous, like the mobile phone. Many used to claim they hated mobile phones, but now look – everyone’s got one.

Even having written all I’ve just written, I still check Facebook; Every. Single. Day. Need to contact someone but don’t have their number? Facebook. If you lose/break your phone, what’s the first thing you do? Exactly.

It’s become too engrained into our everyday lives now and there’s no going back. This is why I believe the advertising capability for businesses is essential (oils).

Also, how else would you know which of your relatives are racist?

Snapchat: in this line of work, I am often asked by clients; “what can we do with Snapchat?” Because Snapchat is “the thing” all the kids are on. The truth is… I don’t actually Snapchat. Am I… am I too old? Surely not… oh God, I am.

45% of Snapchat users are aged 18 - 24 and 70% of all users are female. How can businesses use it? Sponsored filters for one. These are best used at events where people are encouraged to do so (put signs up or something.) These can be targeted geographically i.e. the building your event is taking place in. To be clear, these are frames/still images you can overlay over photos, not the stuff that makes you puke rainbows. That stuff is *really* expensive.

Instagram: the food pics. Yep, I’m guilty of it. I like it too. I like to go to pubs/bars/restaurants and tag the restaurant or tag the brewery and it makes me feel like I’m supporting local business. Bordering on trainspotting style nerdery? Yes (by trainspotting I mean the actual pastime of spotting trains, not doing Heroin.)

Also, being owned by Facebook, it has the same powerful ads targeting but with a similar youth audience like Snapchat.

The thing with Twitter is that it can be whatever you want it to be. My Twitter feed is filled with my favourite comedians, filmmakers, things I find interesting and general funny Twitter people.  It really is a playground for someone who loves words (“like you, mate…” you’re thinking, “banging on like it’s a flippin’ essay.”)

Well, it’s interesting because due to the viral nature of Twitter you get to see a full spectrum of humanity, from the “intellectual snobs” and the “champagne socialists” to the Nazis, the trolls and the interminably stupid.

It can get a bit much for some people, those who like to keep within their “bubble” (and I have nothing against this, I’m fully aware that I exist within an echo chamber.) You see many saying, “I need to step away from this for a while”, “I’m leaving Twitter.” The rest of us watch with morbid curiosity. As mentioned with that opening tweet, Twitter can be a political battleground.

Cartoonist @MooseAllain (someone you should follow by the way) recently tweeted;

It’s true. Just seems to be the nature of it.

I still love it though.

Anyway, these are just my experiences, yours may be very different. If I was going to condense these ramblings into a concise, professional point, I guess it’s;

“The ubiquitousness of social media means there is a huge variety of people on any given platform. Which platforms they use and how they use it will be unique to them. Therefore, depending on your audience, you must carefully consider the platforms you use and how you engage.”

Oh, did you want me to talk about LinkedIn? Okay, here are some tweets from @trouteyes (who you really should follow, although it won’t be for everyone.)

From under an umbrella please Kenny.” 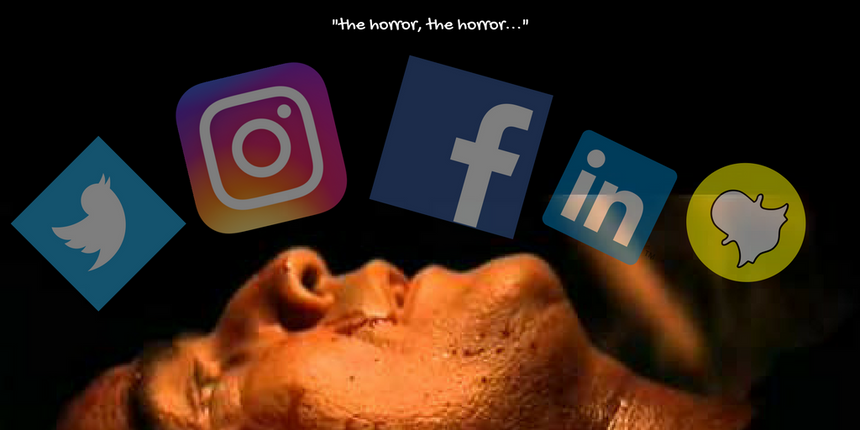 Gerard Depardieu would like to connect on LinkedIn. How would you like to respond? From under an umbrella please Kenny.

13 Pros And Cons Of Having A Distributed Workforce
TMP Worldwide

The Cambridge Analytica Scandal - What Does it Mean?
TMP Worldwide