"Meet your interviewer, Tengai: she’s friendly, observant, and did we mention she’s a robot?

Tengai’s 16-inch glowing face sits on a table at eye level with the candidate. She smiles and blinks forming empathetic facial expressions as she asks “have you ever been interviewed by a robot?”

For most people today, the answer would be ‘no’, but that might not be the case in five years. For that, we have to thank Furhat Robotics, creators of Tengai. The AI and social robotics company that has spent the past four years building a human-esque computer interface that can replicate our speech and subtle facial expressions."

This article goes on to explore the reservations many have about using AI to make hiring judgements. Ultimately the position put forward here is that AI cannot be a sole decision point for deciding whether to progress a candidate but can work very well to eliminate bias when supported by human-based processes around it.

For example... Unlike a typical interview, Tengai doesn’t engage in small talk ensuring all recorded responses are work-related. Each candidate is asked the same questions, in the same order, with the same tone of voice. Tengai standardizes the process to a degree that even the most methodical human recruiters can’t match.  This is working on the premise that standardising removes bias, which I agree, I does help.

Crucially, Tengai knows absolutely nothing about a candidate’s race, religion, gender, appearance, or other visual/auditory factors that commonly give rise to unconscious bias. Once the interview is complete, human recruiters then receive a transcript of the answers. It’s then up to them to decide whether or not to move that person forward.

Enter The Robots Robots designed specifically for recruitment purposes are generally much better than humans at making unbiased decisions about a candidate. This has already proven to be true through a recruitment experiment conducted in Sweden. 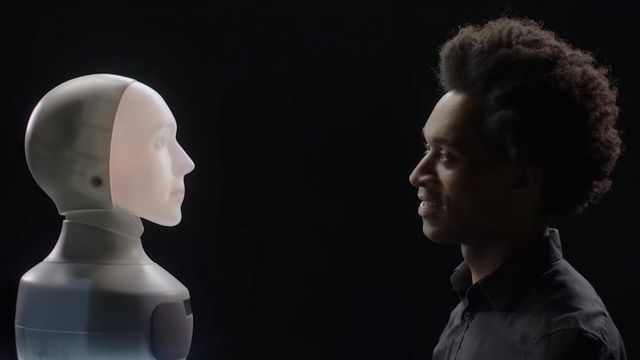 In the fight against unconscious bias, Sweden experiments with AI – but will robotic interviewers really catch on? https://t.co/clRwTuHlGJ

You know the modern workplace has hit next-level training heights when a “virtual human” is teaching soft skills to your employees while leveraging the power of virtual reality (VR) and artificial intelligence (AI). https://t.co/ahgs8byeHx pic.twitter.com/3pYOfWhFb5

Data Engineer, Data Analyst, Data Scientist — How do you stand out?
PeopleScout

With the economic recovery failing women, now is the time to act on gender equality
PeopleScout

Don't know the terms Gen Z use on TikTok? Here's your guide to what they mean, no cap
PeopleScout

How do you get 25,000 young people to see inside your organization in less than a week?
Vanessa Hawes

Anyone spending less on recruitment currently? Thought not.
Robert Peasnell

We're hiring. Here are 8 reasons to join us. And 4 reasons not to.
Vanessa Hawes
repost  cancel