In this series, I'm sharing the five core strategies that we use to drive awareness, usage, and advocacy of content for our clients.

In asking your employees to share content, you are asking them to personally endorse your message among friends, family and peers who trust them. The content that they share with their network will reflect how they want to be perceived and what they want others to think about their employer and the work that they do.

We know that employees share the content that they believe in. This could be that they are proud of an individual or company achievement, they agree with a particular message, the content aligns with their values, or because it adds values to the reader – it tells them something they do not know either about themselves, the industry, or the organisation.

Creating content that employees love to share was a core element of our award-winning “Ant Middleton: Ready for anything 24-hour interactive challenge” for The AA (explained below).

Of course, you’ll have other messages that your branding and attraction content needs to articulate such as your strategic and corporate objectives. To ensure that your more functional messages are also shareable, it’s important to engage your internal audience either in the creation of the content strategy or in the content creation itself to ensure that it resonates.

The Ant Middleton 24-hour, live interactive challenge was easily the most ambitious project of our partnership. Aligning with the AA’s long-lasting connection to the armed services, as well as embodying the Ready for ANYTHING? brand,
this campaign was boosted by a relevant celebrity influencer and engaged the general public through live streaming and social media voting.

Six brave employees were chosen to take part in this 24-hour challenge, living and breathing the Ready for ANYTHING?spirit – following the former Special Boat Service soldier through a series of grueling challenges in the Lake District wilderness.

The final lucky half-dozen were chosen from hundreds who responded to an internal communications campaign and applied to take part, in what was highest engagement level ever for a story on The Hub (the AA’s intranet).

We wanted the public and AA colleagues to really root for our chosen contenders during the event, so to get the interest level rising, we filmed their life stories, ready for sharing on social media. They spoke eloquently and compellingly on camera about their lives. We got first-hand stories of drama, heartbreak, courage and transformation. 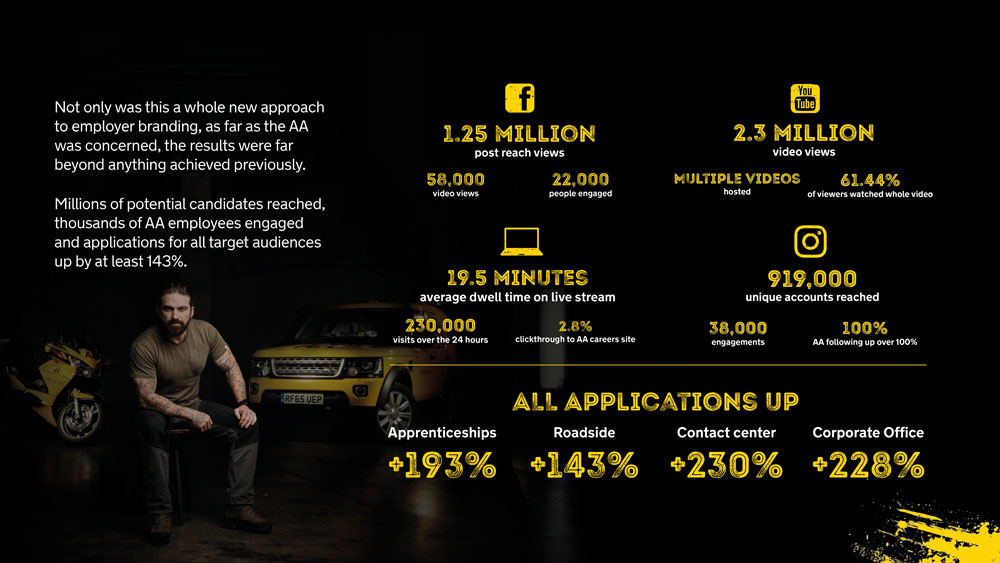 These videos were posted across Instagram, Facebook and Twitter, and they clearly made a connection with people. At the start of the event, colleagues and strangers alike were rooting for particular contenders.

The event began at 4 p.m. on July 25, 2019. The next 24 hours were packed with unpredictable drama. Events were live-streamed, the pace was relentless, and the AA people got into it just as much as the watching public – commenting, voting, watching and sharing across social media.

We decided to involve the audience throughout. In an unusual twist, viewers could select tasks for the contestants while watching the live stream on Twitter, Facebook, Instagram or on the dedicated site we built for the campaign, Ant24Live.com. Selections varied by type and toughness of tasks such as rafting versus quad biking, or a swim
at dawn versus a planking marathon – keeping audiences engaged throughout the 24 hours (although we did allow the participants to sleep!).

The whole show was streamed to AA contact centers, garages and the corporate office, and thousands of AA employees tuned in, acting as social media cheerleaders and social media amplifiers.

Check out the rest of the series here:

2. Putting employees at the heart

5. Creating a foundation to succeed and celebrating success

The case against blending in at work
Vanessa Hawes

Everything I knew about careers aged 23
Vanessa Hawes

Everything I knew about careers as a teenager
Vanessa Hawes

When changing candidate expectations means you need to work harder to stand still, what are the risks with EVP?
Vanessa Hawes

Thrive vs. Survive. Who does your EVP leave behind in a crisis?
Vanessa Hawes
Recent posts from TMP Worldwide