In order to lead a sector, to outrun its competitors, to truly innovate and grow, employers need to harness diverse perspectives.

The way that many organisations assess and select candidates is not fit for purpose when looking to bring in new perspectives because:

Additionally, when hiring to satisfy a tight criteria for a role, there are missed opportunities in terms of addressing wider inequalities within a business, be that gender or ethnicity for example.

Especially when considering leadership roles, employers that consider which candidate is the ‘best candidate’ for the organisation as a whole, rather than just the job in front of them, are truly able to embrace the new and diverse perspectives that will take them further.

Let's use gender as an example.

Seventy percent of internally promoted CFOs had at least 11 years of tenure within their organizations.

If employers look for “the best CVs” based on previous experience alone, it will take decades to transform the diversity of the candidate pipeline.

The Pipeline cites that “there were more CEOs called “Peter” than there were women CEOs in the FTSE 100 until July 2020”.

Six versus five, in case you were wondering. So, our Peter and all the other Peters have likely got a head start over our fictious female candidate, we will call her Natalia.

Not only are white men more likely to recruit white men (as Thomas Barta has explained in his column “Don’t recruit yourself”), but Peter benefits from this not just in the context of this CFO vacancy but all the hirings and promotions that got him to that place.

Natalia on the other hand is statistically more likely to get overlooked at every stage.

This is evidenced by research published by the Financial Times that describes how “talented women are often left behind as 'mediocre' men rise to the top”.

It is thought that they do this by 'imitating empathy' and ‘playing internal politics’. And, was found to be particularly true in the world of finance.

The research, carried out by the London School of Economics (LSE) and non-profit group Women in Banking and Finance found that “men had far more room to make mistakes or be average” and that “women also felt bosses were far less likely to fight to keep them if offered another job.”

It reminds me of something I heard once in conversion: “privilege is being the type of person who is allowed to make mistakes at work”.

So, on the basis that Peter has likely been afforded an easier path to his current position, he has a distinct advantage over Natalia when we look at their CVs side by side.

On paper, Peter is the natural first choice.

But our employer in this example will potentially miss out on the opportunity to realise Natalia’s potential, and benefit from the new perspective and fresh thinking that Natalia could bring to the business in her leadership position.

One is sexism; but the other is a general difficulty in selecting competent leaders, of either sex, over incompetent ones.

“We habitually interpret traits such as overconfidence and self-absorption as signs of high ability, though in fact they’re negatively correlated with it".

They should be seen as red flags, but instead, they prompt us to say, ‘Ah, there is a charismatic fellow! He’s probably leadership material.’”

This research, echoing that done by LSE and Women in Banking and Finance, also describes how women are more harshly judged for displaying confidence while the same trait is rewarded in men.

This indicates that even with a perfectly non-sexist hiring committee, employers can still end up promoting a disproportionate number of mediocre men, provided that subjectively is permitted within the assessment framework.

And, that interviewers take self-belief to be proof of talent.

In fact, there are many other – perhaps more important – traits that indicate a good leader, such as emotional intelligence, calmness, resilience and self-awareness.

Perhaps these are the more pressing indicators to explore and maybe ones where Natalia has plenty of examples to draw on.

"Instead of falling for people who are confident, narcissistic and charasmatic, we should promote people into leadership because of their competence, integrity and humility.”

In this way, recruiting for ‘culture fit’ (predictable mannerisms) and experience (rather than potential) can be the biggest things getting in the way of an organisation that wants to innovate and grow.

Organisations that want to be at the forefront of innovation cannot wait 10 years for diversity to filter up from a grass roots level. 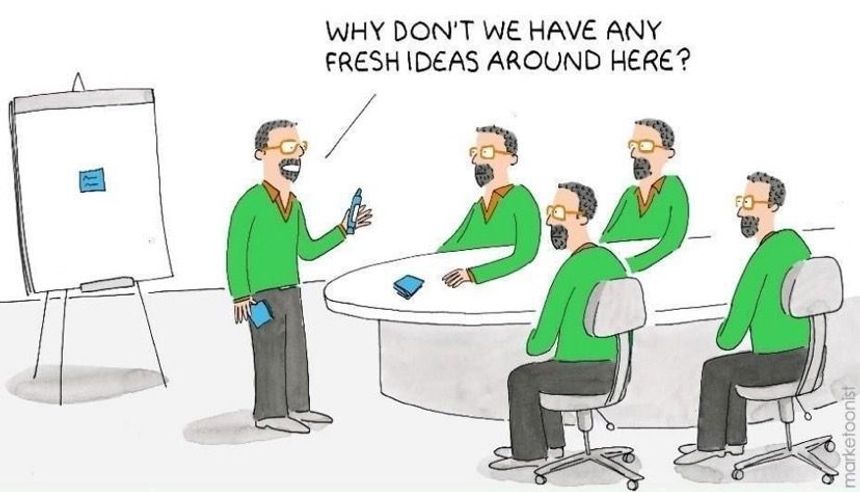 A lot of premium mediocre white men are out here getting a lot of jobs while hyperqualified Black women and men are getting overlooked.

“Next time you pick a team member, give someone a chance who’s your exact opposite.” https://t.co/dJABlLwvUl

Why do so many mediocre men rise to the top? | Oliver Burkeman https://t.co/x36TSTyqzE

Instead of encouraging women to act like male leaders (many of whom are incompetent), we should be asking men in power to adopt some of the more effective leadership behaviors more commonly found in women. @cindygallop @HarvardBiz #leadership https://t.co/uz4WUX28Cp

If you are hiring for diversity but complain that someone doesn't 'fit' your culture you may be doing it wrong.

One of many sad problems with hiring for "culture fit" is you miss out on great people who just haven't been exposed to values like yours yet. I've seen many people hired at @intercom who didn't "fit" in some way, who grew, developed, and became succesful, happy teammates.